It’s fair to say that I started this week feeling very frustrated at having missed my first long run due to the snow on Sunday. I am very pleased to report that I’ve ended the week on a bit of a high having just comfortably completed the longest run I’ve ever done.

After the frustration of last Sunday the Glow Yoga studio was the perfect place to start the week. It was so lovely to come in out of a very cold and frosty Monday morning into the inviting warm studio with it’s SAD lighting

Monday’s class was Core Flow which as the name suggests concentrates on building strength in the core of the body through a serious of pretty stenuous poses. This week we focussed a lot on opening up the hips starting with lizard pose 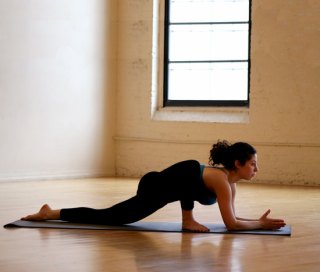 and moving through some other challenging poses. It’s such a great thing for a runner to do as it really helps to stretch out and open up areas which can be a real problem for runners. I went back on Tuesday for the Foundation class, a much slower but still challenging session that each week focusses on a different ‘basic’ of yoga. This week was all about getting in and out of poses safely. I always leave these classes feeling like I’ve learned a lot as well as having had a really good workout. It’s a great partner to my running and something I’ll definitely keep up once my marathon training has finished.

Tuesday saw me back at my now regular run with the ladies from Boutique Sport at Boutique Running Club. I think it’s fair to say that it was the coldest run we’ve ever done, a great incentive to pick up the pace and get round the 4.2 mile route as quickly as possible! However, we also had to be careful as some of the pavements were still quite icy and as the north part of the Outer Circle of Regent’s Park is pretty dark we needed to take care. So the pace was slightly slower than normal, but only just and I actually felt quite comfortable. When I got home it was good to see that my average pace was 11 minute miles – to feel comfortable running at that speed for 4 miles is real progress for me!

On Wednesday I worked from home and took the opportunity to have a lunchtime run. Having missed the long run the weekend before I decided to make this a ‘longish’ run and set out with the intention of running 10 miles. What I hadn’t taken account of was exactly how cold it was outside. I had on 3 layers, hat, gloves and a neckwarmer and I was still cold at points on the route. The first few miles were OK but after about 5 miles my calves were screaming at me and my quads were feeling very heavy indeed. Taking my own advice for once I listened to my body and cut the run short at 8 miles and jumped on the DLR to get home and out of the cold.

Thursday was a rest day and Friday morning was a short interval session. It had snowed again briefly on Thursday night so I was dodging the ice as I ran but managed to complete the session.

Today thankfully the temperature rose into positive figures for the first time in about a week. I had a bowl of porridge with banana for breakfast and set out to run 12 miles, my longest run ever. I had been getting a bit stressed about this during the week, worrying about whether I could do it, how long it would take me – I don’t think missing the long run last weekend helped matters to be honest. I took the decision to switch off the function on my Garmin which tells me my pace per mile. I decided just to go back to basics and run at a pace which was comfortable for me and where I could keep my breathing under control.

It turned out to be a really good decision. I had a comfortable run, the first 4 miles were great, I ran through the City, through Clerkenwell and up towards the Euston Road and King’s Cross. I ran past the beautiful St Pancras Renaissance Hotel 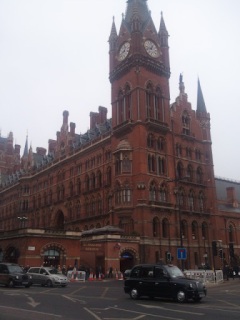 This was where things got more tricky – more busy roads to cross, more pedestrians to dodge and miles 5-6 felt quite tough. Soon enough I was into Regent’s Park and rather than running around it as I do on Tuesday night I ventured inside. I ran through Avenue Gardens which is where Mr J and I had some of our wedding photos taken – it looks pretty different at this time of year! 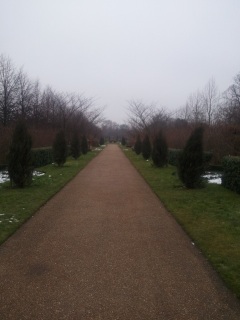 I then ran around a bit of the Inner Circle before passing the lake which was still pretty much frozen over before heading back out onto the Euston Road and heading for home. 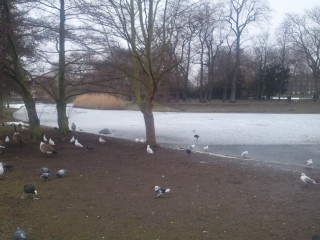 From mile 8 I changed my running strategy from running 9 minutes and walking for 1 to running 8 and walking for 2. This really helped me to conserve my energy and my legs thanked me for it as they were starting to get tired.

Before I knew it I was back on The Highway and nearly home, I ended up doing half a mile more than I’d intended but I was feeling good and could have gone on for longer. I decided to save the extra 0.6 miles for next Sunday and the Brighton Half Marathon – my first race at this distance.

So at the end of this week I am feeling far far better than I did at the end of the last. I have broken a huge barrier distance wise and mentally and feel far more confident having done that. I’m going to have a mini taper week next week to make sure my legs are in tip top condition for next Sunday. Bring it on!