For a while now I’ve been on the lookout for a new bag to wear while out running. I have tried a couple but haven’t been completely satisfied with them. My issues with the ones I’ve tried have been:

So when I read Sian of Dashing Divas review of the Workplay Fleetfoot II I was intrigued. A bag designed specifially for women who run with some nifty features that appeared to address all of the problems that I experience? Sounded too good to be true so I decided to buy one and find out if it was.

I was excited when my bag arrived the very next day after I’d ordered it. The first thing that struck me was how light it was and how well made it felt. 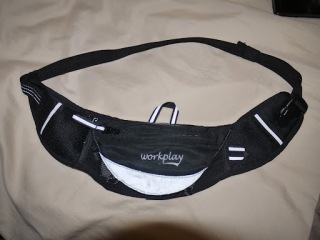 My bag is black and grey but they also come in black and pink. I chose the grey as it’s a more versatile colour – I do like to colour coordinate when I run! This photo was taken with a flash and as you can see all the grey areas are reflective which is excellent for safety when I’m running in the dark.
The main body of the bag has a number of different compartments. Firstly there’s what’s called a ‘ninja’ pocket made of microfleece. This is for keys and coins – it stops them from jangling around and also from scratching your phone or mp3 player. There are two other compartments inside the bag just about big enough for a smartphone, a gel and my inhaler. Perfect for most of my runs.

In addition to this there are some features on the outside of the bag. On longer runs I need to take water with me. I usually use a handheld waterbottle but if I didn’t want to carry that then I could carry it in the elasticated compartment that runs behind the main body of the bag

There’s also a nifty bungee system on the front of the bag which is designed so that you can thread a jacket through if you need to take one out while you warm up. Before our current spate of very hot weather in the UK, I have needed a jacket for my early morning runs while I get warm but then had to either carry or tie it around my waist once I’m warm. Now there’s no need to do that – I can thread it through the bungee cords and it will sit behind me, out of the way while I finish my run. You can see the bungee cords – grey loops towards the bottom of the photo below.

So it fits everything that I want to take out with me and more. But most importantly – what’s it like to run with?

I have used the bag now on several runs including two races, most recently the BUPA 10K on Sunday and can report that it’s extremely comfortable to run with. Once in the right position – it’s supposed to sit in the small of your back – it doesn’t move around at all and I have actually forgotten that it’s there. It’s also really easy to slide around your waist if you want to get something out of it while you’re on the move. 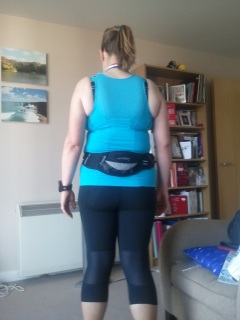 Me wearing my Fleetfoot II during the BUPA 10K

I haven’t yet tried running with a water bottle in place – on Sunday it was so hot I needed water in my hand for the whole race but I used the elasticated pocket to carry tissues as my hayfever was bad and I needed them to be accessible. I’ve also managed to fit a hat in that pocket when it was making my head too hot on a different run. I love the versatility of it!

I have to say that I’m incredibly impressed with this bag. It’s clear that the designers have really thought long and hard about what a woman wants from a running bag and incorporated all of this into the design. I should point out that I’ve not been paid to write this review – I’m just an impressed and satisfied customer.

Workplay make a range of bags for active and organised women. I’ve also invested in their Gymwise II bag which is just as well designed and worthy of a separate review at some point. I absolutely love the look of the Goddess II bag as well – I’ve been searching for the perfect overnight stay/cabin luggage for a while and wonder if this could be what I’ve been looking for. We’re going away in a few weeks – I may have to invest and find out!

So it seems that I have found my perfect running bag – thank you Workplay!