So today was the day that I got to test out my ankle on a short run. I had planned to do a 5km route but woke up this morning with a terrible hangover after a lovely afternoon of drinking cocktails with Mr J yesterday. We kind of forgot to eat in the evening which is why I think I felt so terrible this morning, nothing to do with the alcohol of course.

After getting up quite late and forcing down breakfast I sat around feeling sorry for myself this morning until I could summon up the energy to get into my running kit and head out of the door. It actually felt a bit strange to be getting ready for a run, I’ve not been out for a run from our flat in over 3 weeks. I decided to try out my T-shirt for the British 10K next weekend – I had optimistically ordered a medium size and was a bit concerned that it would be too small. Thankfully it fits, it’s snug and shorter than I would choose for myself, but it’s wearable. 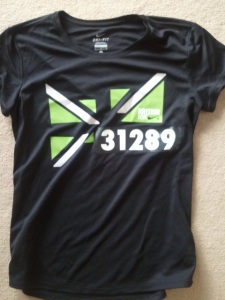 My Garmin took ages to get a signal, probably because the last time it was on was in New York so it must have been quite confused about where it was. Once I got going I felt pretty comfortable, kept my pace down and concentrated on where I was putting my feet. It felt so great to be outside running again – I really have missed it.

I had some new music thanks to a free download from Rock My Run a website which I heard about through Sharon aka The Expat Wife. I chose to download the mix called Quicken My Pulse and I really enjoyed running to it – a great mix of tracks that kept my feet turning over – I think I’ll be back to the site to download some more.

I’d decided to do just 2 miles rather than 3. Conscious of my hangover, not doing too much on my ankle and also that I’d planned to do day 4 of my 30 Day Shred when I got back to the flat. I’m hoping to get out again during the week to do another short run before the British 10K on Sunday. I’m feeling a lot more confident about it after this run for sure. I think the distance is going to feel tough after this amount of time off but as long as I don’t go crazy pace wise I should be fine.