This morning I took part in the PRIDE 10K run in Victoria Park in East London. It was an absolutely beautiful morning for running – sunny with a bit of a breeze – perfect conditions.

I however felt less than perfect. On Thursday night it was the leaving party for my company and it’s safe to say that I had a lot of wine and went to bed far too late at around 3.30am. I am FAR too old for that sort of behaviour and was still feeling the after effects this morning. I could quite happily have stayed in bed but I got up, had breakfast and made my way to the park. This was my first ‘proper’ race for my Saucony’s so I decided to colour coordinate my top to mark the occasion!

This was a smaller race than many I’ve done before with around 1000 people taking part in a 3 lap circuit of the park. A very pretty, very flat course run on wide pavements – it was easily the least congested race I’ve ever taken part in. Plenty of space for everyone and everyone obeyed the staying on the right rule so that faster runners could pass with ease.

My Garmin died on me just before the start of the race so I ran without knowing my time. There were markers at each kilometer so I knew how far I had run but really had no sense at all of how fast or slow I was going. We weren’t allowed to wear earphones so I was also without music which felt quite strange. In places it was nice just to concentrate on running but at other times I could have done with a bit of music to help me keep going.

It’s safe to say that I made this a whole lot more difficult for myself than it needed to be with my late night out preparation. Running felt tough, my body felt tired and there were a fair few walking breaks. It’s a shame as the course definitely provided PB potential.

I’m still waiting for my official time to be posted but I crossed the finishing line in 1.14 and something seconds – it didn’t take us that long to start so at best I ran 1.13 something. A minute slower than my PB at this distance, which I’m quite pleased with given how I was feeling. In some ways it was quite nice to be free of my Garmin but had I realised how close I was to breaking my PB I might have pushed a bit harder had I been able to see my stats. 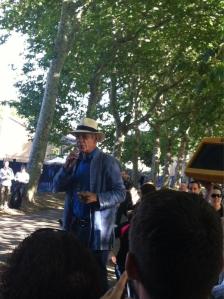 The race was started by Sir Ian McKellen who also stayed around to watch the runners and provide some support. On my second lap I saw him standing by the side of the course clapping everyone on enthusiastically. Not every day you get applauded by Gandalf while you’re running.

So another medal to add to my growing collection and definitely another race to revisit next year. Well organised, super friendly with a cool medal and goody bag at the end. With a towel rather than a T-shirt which I thought was a nice touch – I have a lot of race T-shirts now so it was nice to have something different. My husband was out when I got home so I had to take my own post race photo. It’s a bit blurred but you get the idea!