The end of my racing year was supposed to culminate with the GRIM original race on 2nd December. The GRIM race would have been the first off road, muddy and wet race that I’d tried. Very much outside my comfort zone I’d psyched myself up for it over the last few months and was ready to take it on. Dare I say I was even looking forward to it?

But then I had laser eye surgery and had a flaps created in my corneas which take time to heal completely. While I am fine to run normally again now, taking part in a race where I could very well end up face down in muddy water now seems like a pretty bad idea. It’s not worth the risk of damaging my eyes which are healing up very nicely, so unfortunately GRIM is now off the agenda.

So instead I am focussing on building up my continuous runs and have set myself a target to be able to run 10K non stop by the end of the year. I am not at all concerned about pace, I know that slowing down will help me to keep going for longer – it’s just about building back up my ability to run without stopping. I’m currently at around 45 mins and I think I need to add another 30 mins to that over the next few weeks. Each time I go out I’m aiming to add an extra 5-10mins on. It’s totally do-able.

2013 is going to be all about half marathons for me. I want to get comfortable at that distance so that when I come to prepare for the London Marathon 2014 I have a solid base of training to work from.

My first race of 2013 is the Brighton Half Marathon on February 17th .

I am going to train for that using a Chi Running training program and my aim is to complete the race without stopping to walk. I also hope to improve on my time from last year but that’s not the priority.

Then on May 26th I will take on the Edinburgh Half Marathon. 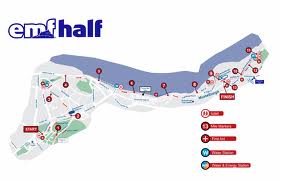 I am going to use Jeff Galloway’s Run/Walk/Run method to train for this race. I want to compare how I feel during training as well as what time I am able to achieve following this method rather than a continuous running one. I will still use Chi Running principles but will incorporate Jeff’s suggested walk breaks into my training and during the event itself.

Once I’ve completed both those events I want to compare the two training methods and how I did in both races. I know it can’t be an exact comparison as the courses are different and I will be fitter having trained for my second half than I was training for my first. But it will give me some idea about which method is likely to give me the best results when I come to train for London in 2014.

I am also eyeing up a couple of other halfs – the Bacchus half in September looks like great fun as does the Bournemouth Half Marathon in October. I love the idea of taking part in the 5K ‘speed of light’ race at dusk on the Saturday before running the half marathon on the Sunday morning. I wouldn’t be looking for a personal best at that race but just to comfortably cover the distance again, building up my confidence.

I’m already registered for the Great South Run at the end of October and I think once I finish that for the third year in a row that it will be time to turn my attention back to ‘the big one’ – the London Marathon 2014.

So that’s my training and race plan for 2013. I’m sure there will be a couple of 10Ks in there as well along the way.

What races have you got planned for next year?