Last night I made it along to the last Boutique Run After Dark which started and finished at the Whole Foods store in Piccadilly Circus. I had been meaning to go along for the last few weeks but between eye surgery and a cough/cold/chest infection I’d not made it. 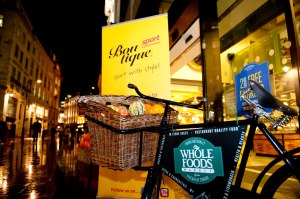 I arrived at the store at around 6.15pm and was greeted with a pink vest to put on and showed where to leave my bags. I recognised a couple of people from when I ran with Boutique back at the start of the year but there were a lot of new faces as well including Leah who writes Leah Naturally and is part of PT Mollie’s Virtual Training Group this session.

Mollie was there too leading the run and soon took us outside for a quick warm up and briefing before we were on our way. I had heard that the run was really fast so I was a bit worried about whether I’d be able to keep up. Thankfully the group naturally broke up into smaller groups running at similar paces. The fast girls were soon off into the distance and I found myself in the last group running with 5 other girls including Leah.

The route took us from Piccadilly down to Green Park, along the Mall to Horseguards Parade, through Westminster to Lambeth Bridge, along the Embankment and back across Westminster Bridge before returning to the Whole Foods Store the same way we came out. It was a really pretty route, especially along the river seeing the Houses of Parliament and the London Eye all lit up at night.

I forgot to start up my Garmin in time meaning that it didn’t pick us up for the first few minutes but I think it was close to a 5 mile route. The pace was good for me, just enough to be challenging but not so fast that I couldn’t try to keep up some kind of conversation with Leah – albeit a few words at a time. I struggled towards the end, particularly with a sneaky incline back up the side of Green Park but I was pleased with how I ran overall given that I’ve not been this far in a few weeks.

Once we were back at Whole Foods we were greeted with Vita Coco drinks and Eat Natural bars as post run re-hydration and snacks. Very welcome indeed.

It was great to be back running with a group again and I really enjoyed the fact that there were people running at a slightly challenging but achievable pace for me. I hope to be able to join the Boutique ladies wherever their next pop up run club happens to be!