If you’ve been looking closely at my blog recently you might have spotted a badge sitting proudly in the side bar telling you that ‘I’m attending Write This Run’. It’s been there for a couple of months representing my anticipation and excitement about going to the UK’s first and only conference for runners who write, or writers that run.

Write this Run is the brainchild of Liz Goodchild and Laura Fountain, two writers who run. They did an amazing job of organising what was a fantastic and memorable event. My appetite whetted by the comprehensive pre event information, I went along with high expectations. It’s safe to say they were not just met but in many ways surpassed.

One of the things that I was most looking forward to was the opportunity to meet in person the people who I have been chatting to on Twitter and interacting with via blogs. It’s often slightly awkward meeting people ‘in real life’ when you’ve been chatting online but runners are a friendly bunch and the chat flowed freely – much as it does in the starting pens of a race.

The day was packed full of speakers. We heard from Social Media and PR experts and well established bloggers, including Laura herself who gave us hints and tips on giving good blog, engaging with our readers and making ourselves attractive to PR companies. If of course that was one of our aims.

My personal favourite session featured 3 inspirational speakers. Donna is a parathlete, diagnosed with a degenerative nerve disease who against the advice of her doctor decided to take up triathlons in a mission to get as strong as possible. Her story was one of guts, perseverance and determination.

Then there was Kevin Betts, @52MarathonMan who ran 52 marathons in a year in a bid to raise awareness of mental health issues following his Dad’s suicide. Oh and just to make it easy on himself all of those marathons had to be under 4 hours, or they didn’t count. His was an emotional presentation which had me close to tears at points and laughing out loud the next. It’s a rare skill in a speaker.

And finally there was Mimi Anderson, the ridiculously hard-core grandma ultra runner. It’s hard to summarise this woman’s achievements but if I tell you that by the end of her session she had a 50 strong fan club ready to crew her next ultra adventure, that will give you some idea of how inspirational she was. Oh, and that she now has her own hashtag #WhatWouldMimiDo? Mimi would do it longer, quicker and in more extreme conditions than anyone else – that’s what Mimi would do.

The final session of the day featured running experts. A sports nutritionist told us how to fuel and recover from our training sessions. Karen Wier talked to us about a use of a credit card that had never crossed my mind before. Clench and lean anyone? 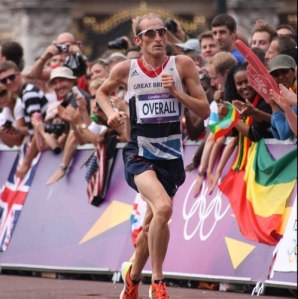 And last but by no means least Scott Overall, Olympic marathoner, let us into the secret of his success. Specially formulated sports drinks? Amazing mental preparation? Nope – good old ProPlus. Who knew?!

As I left the event with the best goodie bag in the world EVER I felt really inspired, both from a running and a writing perspective. Three days later and my mind is still turning over and reflecting on what I learnt and how I can apply it to my running and blogging.

I’m really excited that Liz & Laura are planning more events including another conference next year. I can’t wait!