This is the fourth of the fortnightly Run with an Idea blogging debates and I think this subject should generate a lot of debate!

When I entered my first 5K race in June 2011 my one and only aim was to run the entire way. No walk breaks. No stopping. That, I thought, would make me a real runner. And I did it. In a painfully slow 38 minutes. By the end I was shuffling rather than running, but I hadn’t stopped to walk at all. I was proud, I was a real runner.

Then my sights turned to a longer distance and I signed up for the 10 mile Great South Run the same year. I increased my distance week by week, determined that I would run the entire race. Each week it got harder and harder. The last couple of miles got slower and slower until I eventually felt like I was moving at a snail’s pace. But I was still running and that was the main thing.

So when I lined up with team Thinking Slimmer at the start of the Great South Run I was shocked to find one of the team suggesting that we run/walk the race. She was an experienced runner with several half and full marathons under her belt. All finished in decent times as well. She was a real runner and here she was advocating walk breaks? I was confused.

But I was in a team and the rest of the team were up for it, so I went along with it as well. We decided to adopt a 9:1 ratio of running to walking. Run for 9 minutes and then take a 1 minute walking break. At first it felt odd, it broke my stride and I didn’t really like it. But then something unexpected happened.

Physically I felt stronger than I had done in any of my training runs. It seemed that the one minute walking periods were allowing my legs to recover. I was running faster than I ever had done in training. Mentally it also really helped. We’d broken the distance down into small manageable chunks. Practically I also found it far easier to take on water and gels during a walk break.

As I crossed the finish line in a time much faster than my training had indicated I was capable of, I was a run/walk convert. I decided that I would take this approach into my training for the London Marathon 2012.

And that’s exactly what I did. I stuck with the 9:1 ratio of running:walking for the first few miles and adjusted this to 8:2 later in the race. As it was I ended up walking the last 10 mile of the race due to my running buddy picking up an injury. But I know full well that I could have kept up the run:walk regime all the way through the race.

After finishing the marathon I decided that I needed to go back and teach myself to run properly, without walking. I spent most of the summer of 2012 building up my non stop running from 5K to 10K. I noticed as I did this that my pace started to decrease. This seemed odd. How could it be that I was quicker by taking walk breaks?

It was then that I came across Jeff Galloway and his run/walk/run method. Having read his book I was re-converted to the walk break method. I knew that it made me run faster over all, allowed me to cover longer distances than running more stop and helped me to recover quicker. So why on earth struggle to keep running non stop more slowly?

Most of us don’t run to win races. We run to take part. We’re not in it to compete against anyone other than ourselves. So if I can get to the finish line more quickly and more comfortably by taking walk breaks then why would anyone else care? I decided to go back to the walk/run method for my training for the Great South Run 2012.

Following some advice in Galloway’s book I adjusted my run:walk ratio for my training to 5:1. Despite my initial reservations that this would make me slower, the absolute opposite was true. More frequent walk breaks helped me to keep running faster for longer. I took 6 minutes off my PB in that race and was delighted.

But having achieved a new 10 mile PB, there was something niggling at me. I still didn’t feel like a real runner. Real runners can sustain their pace over 10, 13.1, 26.2 miles can’t they? Real runners don’t walk.

But then the other side of my head argued back. Of course you’re a real runner. You’re still out there covering the same distance as everyone else. Loads of people stop or walk through water stations in races, achieve great times and no-one questions whether or not they are real runners. When Paula Radcliffe stopped for a wee during the London Marathon, did anyone suggest that she hadn’t ‘run’ the whole race?

So I’ve made my peace.

I am never going to ‘race’ a race against anyone other than myself. For me it’s about the achievement of taking part, finishing and ideally getting a PB. So if walk breaks are part of my strategy to make that happen then who cares?

I am Becca and I am a real runner who takes walk breaks as they make me a stronger, better runner. 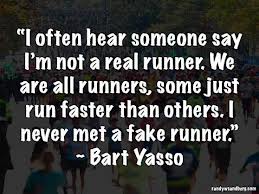 As always the aim of Run with an Idea is to generate debate. I know for sure that there will be people reading this and disagreeing with my post. I’d love to hear from you. If you’re also an advocate of run:walk then I’d love to hear from you too. Leave me a comment. And go and check out what the other RWAI bloggers have to say on the subject here