Yesterday saw the inaugural staging of Run Hackney, a half marathon in my neighbouring borough.

Half marathons are hard to come by in London. There’s the famous Royal Parks Half which is becoming as difficult to get into as the London Marathon itself and since Run to The Beat has now become a 10K, there’s not a lot of other choice. As a consequence there has been a real buzz in the London running community about this new event with loads of people I know signing up to take part.

When I first heard about the race I was keen to enter myself. But something told me to sit it out for this year. Turned out to be a wise decision as my injury wouldn’t have allowed me to train anyway. So I did the next best thing and signed up to be a course marshal. If I wasn’t going to run the race myself it was a great way to still be a part of it.

It’s the first time I’ve marshalled a ‘proper’ race. I’ve volunteered at parkrun before but that’s a small event with around 100 runners held on footpaths in a local park. Run Hackney had around 12000 people signed up to take part and the route wound its way through the borough and into and around the Olympic Park. A different level of organisation was required!

I was asked to go along to a volunteer briefing session a few weeks before the event where I learned more about what was going to happen on the day. There’s a huge amount of organisation involved from mapping and measuring the route, agreeing road closures, the logistics of getting supplies to aid stations, recruiting volunteers and organising other staff. It made me realise where a lot of the entry fee for big races goes to. Staging these things isn’t cheap!

I got a run through of my duties on the day – basically the marshals are there to look out for the runners. To spot any hazards and deal with them if safe to do so, to report back to event control in the event of any emergency and to generally be friendly and encouraging.

So having completed my first stint as a marshal, what has it taught me?

2) Regardless of very clear signs which had been up for ages given ample warning of road closures, some local residents will get quite angry when they can’t go about their usual Sunday business. Thankfully there were people being paid to deal with traffic related issues so I didn’t have to get involved

3) Put on a high vis jacket and suddenly people turn to you for advice. Did I know what time the race started, how long until the 2hour runners get here, how do I cycle from here to Victoria Park, any idea what the temperature is were just some of the questions I was asked by members of the public. Apparently people in high vis know everything! 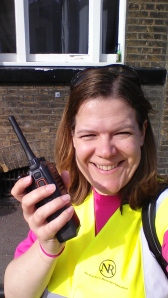 4) Radios are cool. All the marshals were given a radio in case they needed to alert event control to any hazards or to call for help in the event of an emergency. We were all on the same channel which meant that we could all hear what was going on around the rest of the course. Things I got to hear about included

I didn’t need to use my radio myself but it was a brilliant insight into event management and the kind of issues that crop up and need to be dealt with instantly to avoid any impact on the smooth running of the race. 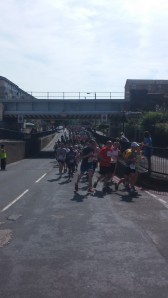 5) Cheering on runners is ace – especially when you’re joined by a slightly drunk but very enthusiastic local. “we love hackney we love hackney” she shouted while jumping up and down and clapping and cheering wildly as the masses went past. It was infectious and I soon found myself joining in, picking out names on people’s vest and cheering everyone along. Great fun.

6) Cheering runners is even better when you know them. I saw loads of people that I knew and it was fantastic to be able to support them on what was a very tough day to be running a half marathon. There were whoops, high fives and one very sweaty hug. It was ace!

7) Even the fast guys struggle in the heat. I am a ‘towards the back of the pack’ runner and in my head everyone ahead of me is breezing through the race making light work of it. My marshalling point was just before 6 miles, not even half way and I was quite surprised to see how tough some of the fast guys were finding it.

8) The very back of the pack is a very lonely place. Hackney Half had set a pretty generous cut off time of a three and a half hour finish. By the time the very last runners came through there was no support left for them at all, except me. I tried my very best to make them feel just as important as the thousands that had gone before them, in some ways they probably needed the support more. I take my hat of to you ladies and gentlemen – that amount of time out in that sun cannot have been fun.

9) Runners are a bit nuts. It was in the mid 20s and much of the course had little to no shade. But there were still loads of people pushing themselves to their limits. You can argue about whether this is sensible or not but there’s no denying that runners are a determined bunch. I had one girl hobble past me intent on completing the course. On the radio I heard of another man who was clearly delirious and needed to stop but was absolutely intent on finishing to the point of getting slightly aggressive with the marshals that were trying to help him. We’ve started so we’re going to finish. Nuts!

10) Runners make good marshals. I was randomly paired with someone who works at events for a living. He knew loads about how to use the radio, spotting hazards and dealing with slightly angry residents. But he knew nothing about running, about what it’s like to take part in a race, how the runners would be feeling, what they would appreciate (cheers, smiles, applause) and what they wouldn’t (shouts of ‘you’re nearly there’ at less than halfway through a half marathon). That’s where my experience as a runner beat his hands down.

“Why are you cheering them, you don’t know them?” he asked “because they’ll appreciate it” I said. Bewildered look.

“Tell them there’s water just around the corner” I said “they’ve been running for nearly an hour in this heat” another bewildered look.

“That’s nearly all of them through now, I guess we’re done” he said. “Not until the last one comes through” I replied “they need and deserve our support just as much as the others”.

I thoroughly enjoyed my experience as a marshal and would do it again in a heartbeat. I hope to Run Hackney myself next year but if for any reason I can’t then I’ll be back to stand in my high vis jacket looking out for and cheering on every last runner again.