Last week I got the opportunity to meet and have a chat with Dame Kelly Holmes, double Olympic gold medalist, as you do. 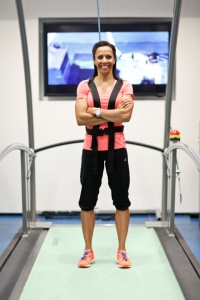 I had been invited to an event at the GSK Human Performance Lab in Brentford by MaxiNutrition. It was an opportunity to find out more about the impressive facility, the research done there and how that is translated into the development of MaxiNutrition products. I may not have mentioned this before but I have a background in biochemistry so I jumped at the opportunity to get a bit ‘science geeky’ for the night. Obviously the chance to meet a middle distance Olympian was a bit of a draw as well!

I’ve got to admit to being a bit nervous about the whole ‘interview with an  Olympian’ thing. I’ve never really met anyone ‘properly’ famous and was a bit concerned that I’d get tongue-tied or ask really dull questions or that she’d wonder what on earth little old me was doing there talking to her. I needn’t have been concerned. From the moment we met she was relaxed and chatty and I felt totally at ease.

The first thing I noticed from a distance was how tiny she is. Really small. Although she’s also got guns of steel and definitely a look of someone that I wouldn’t mess with. Up close it was clear that she is still in amazing shape, 10 years on from her Olympic triumphs in Athens.

I asked her about what her training regime had been like as an international athlete and particularly how much strength training had played a part. I was quite surprised when she told me that an awful lot of her training was strength related. On reflection I probably shouldn’t have been. To run 800 or 1500 meters quickly, you’re going to need strength and speed and my own experience over the last year or so should have told me that this would play a major part in a middle distance runners training.

With up to three sessions a day Dame Kelly’s training included sprint sessions, fartleks, weights work and good old bodyweight HIIT, including burpees. I may have to change my opinion on my least favourite move – if it’s good enough for an Olympian then it’s got to me good enough for me!

She told me that she thought more runners should pay attention to strength training to help them improve. Too many people in her opinion start running and do nothing else to support their training and then get frustrated when they stop making progress or start getting injured. Strength training in her opinion complements running well and it’s definitely something she’d encourage runners to do.

We moved on to talk about recovery. Training up to three times a day is pretty hard-core and it’s going to take its toll on the body so maximising recovery would surely be important? Dame Kelly let me into a little secret – contrast bathing. I’d asked her whether she thought that ice baths worked and she said that she definitely did but that the most effective type of recovery in her opinion was switching between cold and warm. So 10 minutes in a ice bath – a dustbin full of it in her case, followed by a warm shower or brisk massage of the muscles and then back into the ice. I’ve always been a bit sceptical about whether or not ice baths actually make a difference. I’ve used them during marathon training and they’re not a lot of fun but now that I know they have the Dame Kelly seal of approval I’ll try to embrace them a little more.

I asked Dame Kelly about how she trains these days and how she keeps herself motivated. She told me that to mark her 10 year anniversary she decided to set herself a challenge to take part in one duathlon every month. Cycling, she said, was quite difficult for her, it uses totally different muscles to running and she’d had to train really hard to become proficient in it. To keep herself motivated she sets herself small achievable goals, like taking 20 seconds off her bike time. She told me that she gets a real buzz out of competing in the events, from watching the elites whizzing past to staying around to support the tail enders come home.

My time with Dame Kelly was soon at an end and I asked if we could have a photo taken, expecting to pose for a regular shot. As quick as you like she was up out of her chair saying “come on lets pose doing squats”. And before I knew it there I was with a barbell on my back, squatting next to a double Olympic champion. Excuse my poor form, I was a bit overexcited!