Last weekend I travelled to Wiltshire to support Team Inferno, a group of Julia Buckley’s fat loss clients, as they took on Tough Mudder South West. Originally I was supposed to have been part of the team, but I reluctantly pulled out a couple of months ago when it became clear that my hip wasn’t going to be ready for the training or the event itself. I was pretty gutted but decided that if I couldn’t be with them out on the course then I’d be part of their support crew. There was no way I was going to miss out on being there.

Here’s 10 things I learned from spectating at Tough Mudder.

When you go to support someone at a road race pretty much all you need to do is stand and cheer. Unless its a marathon or ultra, they’ll be carrying pretty much everything they need for the race with them. Not so at Tough Mudder. The chances of gels, snacks or personal belongings surviving the obstacles, mud and water are pretty much zero, so the role of the spectator becomes more one of ‘support crew’. We had bananas, haribo, sports drinks and inhalers stashed in our rucksacks. Making sure that we spotted the team became all the more important when you knew you were carrying fuel to help them around the course.

It’s also far more difficult to predict what time they’re going to be at certain points on the course. With a road race people’s mile splits are usually relatively predictable and you can work out where they are going to be when with reasonable accuracy. Not so with Tough Mudder – as a spectator you can only reach a small number of the obstacles and you really have no idea what the team have had to face since the last time you saw them. It’s a matter of sitting and waiting!

When I took part in Tough Mudder last year the number of women there was pretty small. I reckon the split of male:female was around 85:15 and most of the people there looked super super fit, almost intimidatingly so. This year the demographic had changed. Definitely more women and definitely more people in ‘average’ shape, and some not in particularly good shape at all.

Personally I think it’s great that events like these are becoming more mainstream and accessible and not just for the super fit. Training for something like Tough Mudder is a massive challenge, the running is only half of it. If people are being encouraged to incorporate some strength training into their lives in preparation for events like this then all the better I say!

The demographic might have changed, the toughness of the course definitely hadn’t. 12 foot walls to scale, skips full of ice with barriers half way so you have to completely submerge yourself, 12 miles of tough cross country running, 15ft leaps into cold, muddy water, 15ft half pipes to run up and a canopy of electrified wires to run through.

One of Team Inferno got injured during an obstacle called Mud Mile – sounds pretty innocuous right? She twisted her ankle so badly that it swelled up and she couldn’t continue.

It’s a tough tough course, definitely not for the fainthearted.

We spent quite a lot of time waiting at Funky Monkey for the team to arrive. Enough time to watch probably hundreds of people try to make their way across the bars. These are no ordinary set of monkey bars – they’re on an incline, they are slippery and apparently they were rotating.

Making your way across takes a super amount of strength, but there’s obviously also technique involved. We saw lots of incredibly fit looking men and women plunge into the water having made it only to the first or second bar. It made me feel slightly better about my complete inability to do them last year!

Those that made it, particularly the women were greeted with massive cheers. Two of Team Inferno made it across – total heroes! 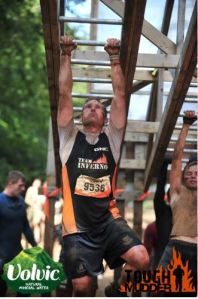 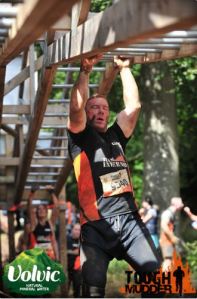 You could probably complete Tough Mudder on your own, if you were pretty strong and didn’t mind relying on strangers for some help. In fact that’s part of the ethos of the event. It’s not a race and as part of the pledge that you take at the start you promise to help out other Mudders on the way around the course.

Personally I can’t imagine doing an event like this without being part of a team. It’s gruelling, both mentally and physically and it was clear that Team Inferno had each other’s backs, arms, legs – whatever was necessary to help each other around that course. 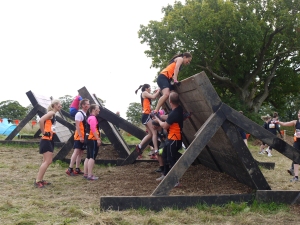 6) Being team photographer is ace 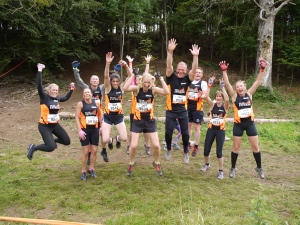 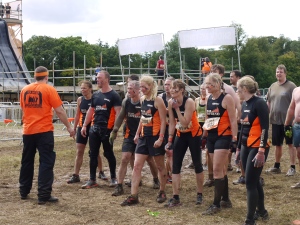 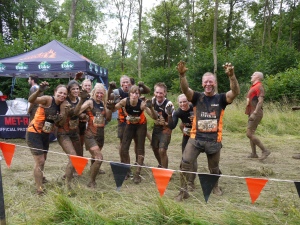 Everest is one of the iconic Tough Mudder obstacles. It’s a 15ft half pipe that you have to run up, take a leap of faith and hope that someone at the top will catch you and help you over. It comes at the end of the course so you’re absolutely exhausted before you even think about taking it on and standing at the bottom of it feels incredibly daunting.

It got the better of me last year – I managed to leap into the arms of two lovely men who did their very best to haul me over the top but I just didn’t have the upper body strength to do it. I knew that some of Team Inferno were a bit concerned about this one and whether or not they’d be able to do it. 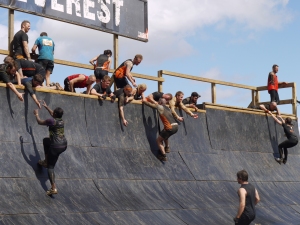 I stood and watched as the first member of the team made their way up the ramp and over the top, helped in true Tough Mudder style by total strangers. Once at the top they then stayed and helped to haul the next member of the team over, and then the next. It was an awesome display of teamwork and amazing to watch as one by one they each conquered Everest.

8) Orange headbands are the new medal

Don’t get me wrong, I love a medal. But I’ve got loads of them. It’s great to see an event make something out of a different race memento. Those orange headbands were worn with pride, some well into the evening and some I suspect the next day. And a pint of beer beats a goody bag with a random cereal bar and bag of dried cranberries any day, right?! 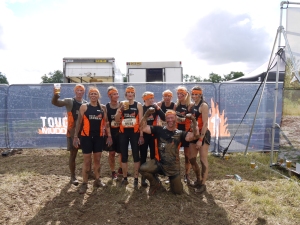 Spectating and supporting was a great experience. So much better than not being there. But not nearly as good as taking part. I totally made the right decision to pull out this year – I’m sure I would have aggravated my hip and potentially put myself out of action for a long time. But my goodness I wanted to be out there with them!

Spectating has just confirmed to me that I absolutely want to do Tough Mudder again. So that’s going to be my goal event for next year. Sort out my niggly hip, get myself into the best shape possible and get back out there.

While post race drinks after a road race are filled with chat of PBs, mile splits and gel consumption, the Tough Mudder after party is all about the gun show. Support crew got to join in with this one – I’m quite happy with my entry! 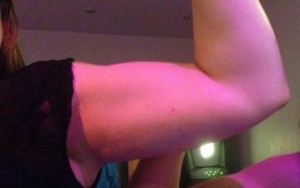