My fitness levels have come on in leaps and bounds in the last 18 months – I’m without a doubt stronger, faster and more agile than I was. Workouts that I used to find challenging I can now complete with relative ease and the weights that I’m lifting are considerably more heavy.

But I haven’t really had an opportunity to benchmark my fitness levels against any particular standard. Until last week that was. 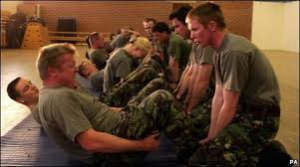 I work with a number of men who used to be in the military. One of the first things that springs to mind when I think about people in the army is their fitness levels. I recently watched the Channel 4 series on Royal Marines Commando training which illustrated exactly the levels of fitness that are required. This programme showed one of the toughest basic military training programmes in the world, so it was a somewhat extreme example, but having chatted to the people I work with they recognised similarities to the training that they went through themselves.

So when one of them suggested that we start up a team challenge to see who was fit enough to meet the basic standards for the Army I was intrigued. The test sounded straightforward enough. As many push ups as possible in two minutes, then as many sit ups as possible in two minutes followed by a one and a half mile run as fast as possible. There are targets to meet which are adjusted for gender and age. In ice bucket challenge style the person who completes the challenge gets to nominate the next person to do it. So on Thursday morning this week I found myself jogging down to St James’ Park to start my Army Basic Fitness Test challenge.

I’d been given my targets to pass the test but also a more challenging set of numbers that would see me score maximum points. I could score a maximum of 100 points for each exercise but needed a minimum of 70 in each to pass. So I couldn’t make up for a slow run by doing extra sit ups – I needed to meet the minimum score for each.

As a 40 year old woman my targets were:

We started with press ups – I got to 20 without really breaking to much of a sweat and by the time I’d got to 30 I was being told ‘3 more and you’ve scored maximum marks’. 33 press ups it was! All those press ups I did on Extreme Inferno obviously paid off. 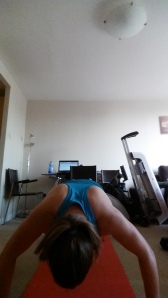 Sit ups were more challenging. I do a lot of core work but hadn’t done military style sit ups for some time. I got to 40 in around 90 seconds and decided that I’d had enough. My lower abs were screaming, I’d met my minimum target and that would do me.

I though I was going to die on the run. Or be sick. Or expel my lungs through my mouth. It was awful, I felt terrible and kept having to stop to recover and get my breath back. Despite feeling slow and decidedly unfit, thanks to some ace Army style coaching from my colleague I kept going. “I’m going to be sick” I panted “you can do that once you’re finished” he replied as he kept one pace ahead of me pushing me to run as fast as I could. I finished the 1.5 miles and literally couldn’t speak for 5 minutes afterwards. He wouldn’t tell me my time and I assumed that I’d failed.

Back in the office the scores were revealed and it transpired that I’d completed the run in 13:58 – well under my target. It meant that I’d passed the test. When the scores were added up I was at the top of the leader board – well above a woman nearly 20 years my junior and also ahead of someone who actually used to be in the army! My performance on press ups was hailed as “one of the best I’ve ever seen from a woman”.

So I’m really quite pleased to have been deemed fit enough to join the Army. Not that I’m going to, but it’s fantastic to know that at the age of 40 I’ve passed test that I would have struggled with in my 20s!