I quite like running in winter. There’s something about getting layered up and hitting the streets. Knowing that while you might start out a bit on the cool side you’ll soon be lovely and warm but unlikely to ever get too hot. Seeing the mist as your warm breath hits the cold air. Finding that your favourite paths and routes are that little bit quieter as more people stay inside. Getting my dose of daylight by going for a run at lunchtime to balance our travelling to and from work in the dark.

Sunny and cool are probably my favourite running conditions and every now and again London serves up one of those perfect running days during winter. That’s the good side of winter running.

For the last two out of three winters I’ve been training for the London Marathon and have had to embrace winter running in all its glory. Forcing myself out of bed on dark cold and wet mornings. Praying that the snow would stay away. Leaving the house looking like a Christmas tree in an effort to be visible. Sometimes having to head out and run in actual snow.

On many occasions I’ve cursed winter running – willing the lighter, warmer mornings to arrive. Looking forward to the day when I could leave the house without gloves and a hat. And then panicking when that day arrived knowing that it meant race day was getting ever closer.

This winter I’m not training for a marathon. I’ve not really run consistently for some time and haven’t done anything beyond a sprint session since the end of September. I am loving the training that I’m doing right now but now that the days are getting shorter I’m starting to crave some time outside in what little natural daylight there is. So I’m planning on adding some running back into the mix.

Those of you who’ve been following this blog for a while will know that I like a good goal. So rather than just say ‘I’m going to do some running’ I’ve entered a race so that I have a focus and something to aim towards. 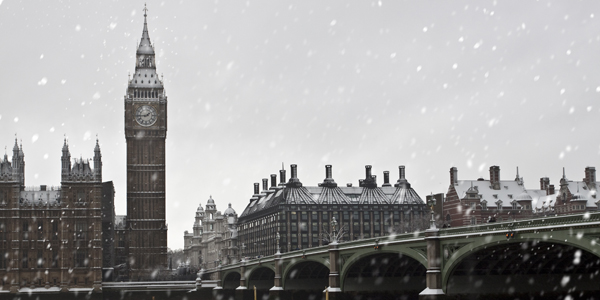 The Cancer Research London Winter Run seemed like the perfect goal race. A closed road 10km race, starting in Westminster the route heads out on a loop past some of London’s most famous landmarks including The London Eye, St Paul’s Cathedral, Big Ben, Tower of London and many more iconic London sites. As well as a great route, the race features some extras that make it sound like a lot of fun. A giant snow ball warm-up, an ice cave and snow zones on the route, a winter warmer finish zone and polar bear hugs at the finish. What’s not to like?

So I’m all signed up. And if having read this you fancy signing up too then I have some good news. Standard entry costs £39 before 16th December but if you use the discount code KISDISCOUNT you can reduce that by £3 – for a limited time. 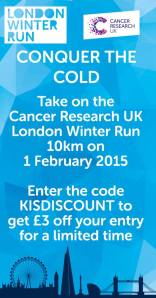 So if you also want a winter running goal and something to keep you motivated during the cold months, then what are you waiting for? See you there!

Photo credits http://winterrunseries.co.uk/ (except for the one of me, I took that!)