I wasn’t going to post about this again until the end of Cycle One but a few people have asked how I’m doing and were interested in finding out more about the plan so here’s a brief update at the end of my first week.

I think the first thing to say is that this week was always going to feel different – back to work after Christmas and New Year, back to a full exercise schedule and back to healthy eating. Gone were the excuses for treating cheese and biscuits as a meal, no more picking at chocolate after dinner and no more excuses for another cheeky tipple. Yep, the party was over and even if I’d gone back to my general ‘healthy eating’ of before Christmas then I think I’d have noticed some changes. So I’m not going to read too much into how I’ve felt this week.

One of my main reasons for doing the 90DaySSSplan was to educate myself. To learn more about macronutrients, portion sizes and the best kind of things to eat for fat loss. From that perspective I’m delighted with how this first week has gone. It’s already become very clear that I was snacking a LOT before. That in itself could well account for my stalling fat loss. The other big difference to how I was eating before is the timing of carbohydrate intake. In Cycle One of the plan you only eat carbs after training and not at any other time. Although I was eating what I thought was a low carbohydrate diet I’d never paid any attention to when I was taken the carbs that I was eating on board.

The food on the plan that I’ve tried so far has been tasty and satisfying. The meals are generous and I’m always full up when I’ve finished them. I have however experienced a bit of hunger in the afternoon, so after an e-mail exchange with Joe I’ve moved both my snacks into the afternoon – rather than forcing one down in the morning. I’ve had a good variety of food this week – my favourite meal so far is this lean muscle mince with kale and a fried egg. A new combination for me and one that I really enjoyed. 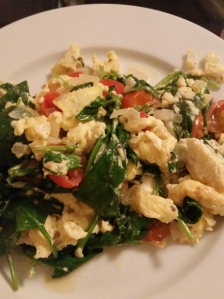 Planning is absolutely key. You need to make sure that you’ve got the ingredients you need for meals for the next few days ahead. I’ve also found it important to have a contingency so that I can switch meals if I need to. I had planned to train on Thursday, but ended up taking a rest day instead and that meant switching the post workout breakfast that I’d planned for a low carbohydrate option instead. Luckily eggs saved the day. 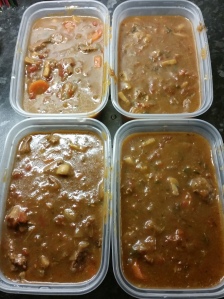 I’m also embracing batch cooking in a big way. It’s time efficient and also means that I can build up a small store of meals in the freezer so that if my plans change I have different things to choose from. Sunday afternoons are now dedicated to cooking up a storm in the kitchen – last week it was a big batch of beef stew (which tastes much better than it looks) – this week I’ve just made some chicken and cashew curry and some Cajun turkey mince.

So is it working? Well it’s obviously early days but I do feel better – but that’s obviously compared to how I felt after two weeks of festive indulgence. My post Christmas ‘bloat’ has gone and I’m sleeping better. I had some headaches earlier in the week which I attributed to the change in diet, but I think I’ve also been fighting off a cold so it could have been that. The only other ‘side effect’ that I’ve noticed is that I’m constantly needing the loo – 3 and a half litres of water a day is a LOT of liquid!

It’s definitely too early to be taking new measurements or photos but I’m feeling quietly confident that at the end of Cycle One there are going to be some noticeable changes.