I used to practice yoga quite regularly when I was marathon training, finding it a really good way to balance out the effects of pounding the pavements for hours on end. In the last year or so yoga has dropped out of my life, partly as I’m not running so much but also because of the shiny new gym that opened up right opposite my flat. I tend to spend my Sundays in there rather than going to a yoga class.

I’ve definitely noticed the difference in my body from not doing as much yoga and as I’ve been picking up the running again a bit more recently I knew that it was something that I would feel the benefit from. I’d heard quite a few runners raving about jasyoga – an online yoga resource developed with athletes in mind. At just over £3 for a monthly subscription that you can cancel at any time I signed up and have really enjoyed incorporating some of the short video sequences into my recovery days. I love the jasyoga approach – focussing on the parts of yoga that are of specific benefit to athletes -there’s no omming or contortionist moves, just sequences that mobilise, stretch and relax the muscles that us runners put to work with every stride.

I was really excited to find out that Erin from jasyoga was running a free outdoor yoga session today – perfect ahead of  my 10K race tomorrow. Saturday is usually Olympic Lifting day for me but that’s not exactly ideal preparation for a race. Yoga on the other hand ticks all the race prep boxes!

Organised by Ashley the class took place in a small park in Islington next to the canal – a lovely location, even if the sky was a bit grey. Erin started the class by asking if we had any particular requests. Since the group was full of runners, many racing tomorrow it was no surprise to hear ‘hips, hamstrings and calves’ being listed as the areas we wanted to work on.

Erin took us through an hours session – starting by relaxing on the mat and then moving slowly through sequences for hips, calves, hamstrings and upper body – an area which runners often neglect but is really important for efficient running technique.

I’ve never practised yoga outside before and at first I was a bit self conscious and very aware of my surroundings – the person next to me, the birds flying overhead, the other people in the park. As the session progressed I relaxed in both body and mind and by the end of the hour I was totally blissed out and could happily have had a little snooze, completely undisturbed by what was going on around me.

This session was just perfect for me today to get me ready both physically and mentally for the race tomorrow. It was lovely to meet Erin and practice with her in person having practiced with her online for a couple of months and to catch up with some friends who were also there. Erin may be running some more outside yoga classes over the rest of the summer and I’ll definitely go along.

So that’s the race prep complete – tomorrow I run! 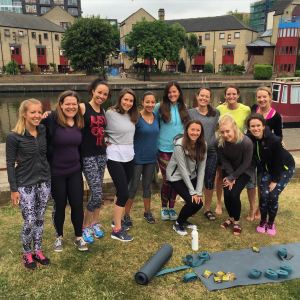 Big thanks to Jasyoga for the free class, the photos and the Picky Bars!