The week before last I bit the bullet and did something that I’ve been thinking about for a while. I bought an activity tracker. After a bit of research and asking around among my fitness pals I went for the Fitbit Charge HR Heart Rate and Activity Wristband. The main thing that attracted me to this model over any other was the heart rate monitoring and the excellent reviews of the app. That and the fact that it’s pretty small, doesn’t stand out on the wrist and can easily pass for a watch. 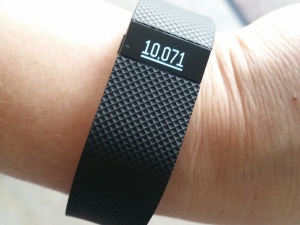 Setting it up was an absolute doddle. There’s a wireless dongle that you pop in a USB port if you want to use the app on a laptop, or it connects with your phone via Bluetooth. Both really straightforward. Answer a few questions about your age, height, weight and your goals and you’re ready to go.

The band itself shows the time, steps, heart rate, distance walked, calories burned and floors climbed. You scroll through these by pressing the small button on the left of the display. My step target has been set at 10,000 a day, you can change this if you want to, and when you achieve it the band buzzes at you, and you get a notification on your phone to congratulate you.

My reasons for wanting an activity tracker were quite simple. I workout regularly but wasn’t really sure about whether I was being active ‘enough’ throughout the rest of the day. My fat loss progress has been what I would call slow and steady and I wondered whether an activity tracker might shed some light on the reasons for that and help me speed it up a bit.

I’ve got my Fitbit linked up to My Fitness Pal, so having set a weight loss target the Fitbit has set me a calorie deficit target and lets me know through the day how I’m doing against that target. Ideally I need to be in the ‘green zone’ at the end of each day, somewhere around a 500 cal deficit per day.

What I’ve found so far this week is that I’ve either been in the yellow zone – too few calories taken in compared to what I’ve expended or the red zone – too many calories taken in compared to what I’ve burned. I guess the aim is to make sure that over the course of the week I end up in the green zone. As you can see from the picture above it’s halfway through Sunday so I’m not quite sure where I’ll end up yet, but it should be there, or thereabouts.

Looking at calories expended versus those I’m taking in has been quite eye opening. I’ve been tracking my food on MFP for a while now, I don’t think of myself as ‘counting calories’ but it’s really useful to have a sense of what I’m putting into my body. The addition of the Fitbit has made me realise that on some days, especially rest days, I’m really not burning off enough to need all the fuel that I’m putting into my body. It’s not a huge amount out of kilter, but a few tweaks here and there might see that fat loss progress accelerate.

One thing I need to bear in mind is that the Fitbit is optimised to track cardio based workouts such as walking and running. It doesn’t do so well with things like lifting weights – I can tell the app that I’ve done a workout and it adjusts the calorie burn. I assume that it take my heart rate into account in the time range that I tell it I’ve been exercising, but I’m not sure. It also probably doesn’t take account of the ‘after burn’ effect that you get with resistance training. But nothing is perfect and I think that the information it’s giving me is good enough – it doesn’t need to be accurate to the nearest calorie!

The heart rate function, which was one of the selling points for me, really is fascinating. Each day you get a trace of how your heart rate has varied through the day as well as a measure of your resting heart rate. This was my trace from last Sunday which included an intervals session on the treadmill at around about midday and then an afternoon and evening pretty much sat on the sofa!

The other cool thing the Fitbit does is track sleep. It’s set me a target of 8 hours a night. This week I’ve had an average of 7hrs and 37minutes. I think that’s pretty much typical for me and I feel fine on it, although it would be nice to not be so restless on occasions! 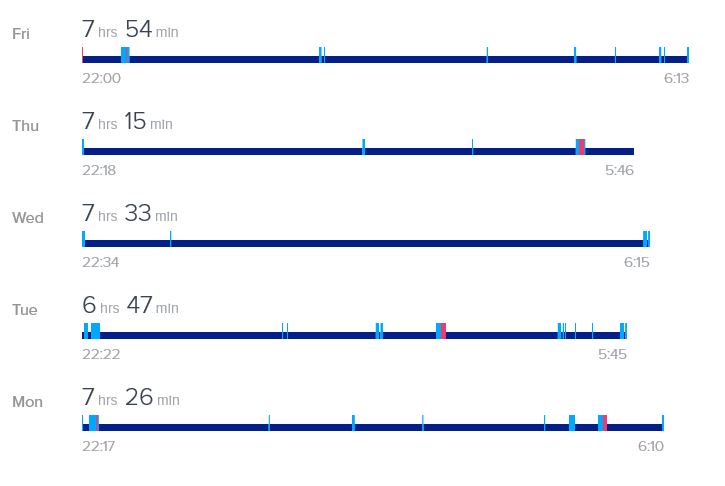 Overall I’m pretty impressed with the Charge HR so far and am glad that I brought it. It’s already given me some insights into how I could speed up my fat loss a bit and is also providing me with some useful data on other aspects of my overall health.

with my own hard earned cash. I’m writing about it because I’m pretty impressed with it so far.