I’ve watched the London Marathon on TV many times. Although I’ve lived in and around London for most of my life I have never been out onto the streets to watch it ‘live’ so I had no idea what to expect on Sunday April 17th when we walked out of our flat. 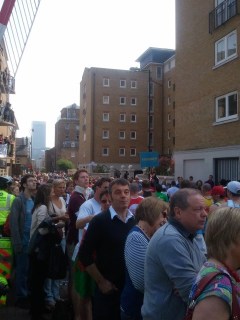 There were hundreds of people lining the road, cheering and clapping the hundreds and hundreds of runners who were streaming along the route. From the moment I saw it I was transfixed. 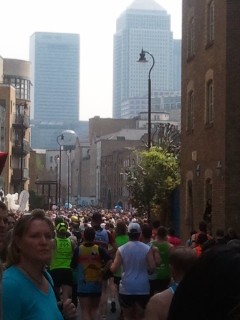 I managed to find myself a spot with a great view and I stood and watched and applauded the runners as they went past. I clapped my hands until they were sore. 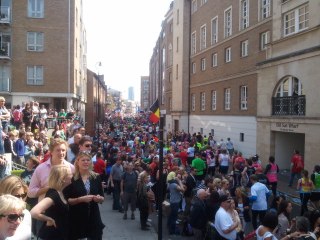 As I stood there and watched the runners go past I saw some truly inspirational sights. Running 26.2 miles is tough enough in itself but there were people doing it in rhino costumes, carrying a washing machine on their back, joined together into a human caterpillar and countless other crazy things, all to raise money for their chosen charity. I spotted fit young things, people far more out of shape than me, people who must have been older than my parents – people of all shapes and sizes out there doing something amazing.